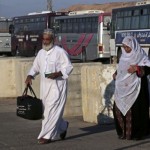 For the first time since June, two busloads of Gaza Strip residents were allowed entry into Israel on Monday to visit their incarcerated relatives, a Palestinian official told the Palestinian Ma’an News Agency.

Some 60 Palestinians were allowed to cross the border.

The regular prison visits have been suspended since the June 12 abduction and killing of Eyal Yifrach, 19, Gil-ad Shaar, 16, and Naftali Fraenkel, 16. Before the killing, select Palestinians were allowed to enter Israeli territory to meet with their imprisoned family members every Monday.

Israel began to ease its restrictions on the Gaza border crossings in early October, allowing hundreds of Gazans to pray on the Temple Mount for the first time since Hamas began governing the coastal enclave in 2007. The visit was among a package of concessions Israel made in the wake of a 50-day war against Hamas to coincide with the Muslim holiday of Eid al-Adha. Israel said it granted some 1,500 permits to Palestinians in Gaza 60 years old and up to pray at the al-Aqsa Mosque during the three-day holiday.

Israel has sharply restricted travel out of the Gaza Strip since Hamas took over the territory in 2007. It has granted permits for humanitarian reasons and to Christians wanting to travel to Bethlehem for holidays, but permits specifically meant to allow Muslims to visit the mosque have not been issued previously, according to Gisha, an Israeli group that advocates freedom of movement for Gazans.

Israel said it has eased other restrictions as well, including allowing agricultural and fishing products to be exported from Gaza to the West Bank. Israel also has agreed to a procedure that would facilitate the entry of construction materials into Gaza to help with post-war construction.