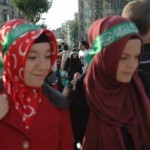 Gaza-based Felesteen reports that Gazans are now creating knife- and dagger-based theme parties and weddings in order to celebrate the wave of terror attacks that have taken place across Israel over the past six weeks.

At weddings and other parties, children are now wearing military uniforms — and young men are displaying daggers and knives. Singers are rhapsodizing about the “heroes” who stab Jews, and calling for more attacks.

Fadi Abu Jabb, 27, wore military trousers on the eve of his wedding and placed a dagger on his waist during a bachelor party. Fadi’s friends and relatives shared his joy by dancing with their own knives, to show their support for terror attacks in Jerusalem.

Fadi said that the military uniform was his fiancee’s idea, and that his party was meant to show that all Palestinian people support “armed resistance,” and car-rammings, stabbings, and shootings in the West Bank and Jerusalem. He prayed for God to bless him and give him the ability to set up a jihadist family to be part of the Palestine Liberation Army, Allah willing.

In a similar scene, at the wedding party of Murad Hussein there were songs associated with the stabbings. Twelve children in keffiyehs performed. They put on a comic play showing Palestinians attacking a group of Jews causing them to flee — even though they had sub-machine guns — to the amusement of the audience.