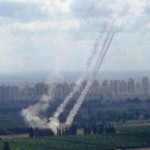 Rockets fired earlier in the day saw one person killed and three others were wounded near Dimona at around noon, while rockets fired in the early evening saw hits in Ashkelon and a number of communities in central Israel, including Rechovot and Nes Tziona.

Four rockets exploded in Eshkol Regional Council shortly after 11 pm. No injuries or damages were reported.

At 10:45 pm, a report was received that two Egyptian soldiers sustained wounds after a rocket fired from Gaza Strip exploded near Rafah Border Crossing.

At around 7 pm, sirens went off across central and southern Israel, and initial reports claimed Iron Dome had intercepted at least one rocket about a Rechovot-area community. At around 6:30 pm a rocket salvo was fired at the Be’er Sheva area. Iron Dome intercepted three of the rocket while the five additional rockets exploded in open area.

A few minutes before hand, Iron Dome intercepted rockets fired at Ashkelon, and shrapenel from the blast hit an electric line, cutting power off in different parts of the city. Meanwhile, sirens continued to roar all over the south.

At around five, two rockets exploded in the Sdot Negev Regional Council.