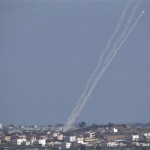 As the Egyptian-brokered ceasefire expired at 8 am today, air raid sirens were heard in Ashkelon, and the Hof Ashkelon and Eshkol Regional Councils. Gaza terrorists launched a barrage of rockets on southern Israel; Iron Dome intercepted one over Ashkelon, Ynet reported.

Two rockets fired from Gaza landed in open areas in Eshkol Regional Council earlier on Friday at 4 am, hours ahead of the expiration of the 72-hour ceasefire that ended a month of violence, the IDF said.

The rockets fell in an open area in southern Israel and caused no casualties, it added. There has been no immediate Israeli response.

No one claimed responsibility for the rockets and it was not clear if it was Hamas that had fired them. There

A senior official says Hamas has decided not to extend the ceasefire with Israel because Israel has rejected all of the group’s demands in indirect talks in Cairo.