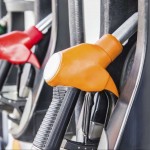 Gas prices, just below $2 nationwide based on the average cost of a gallon of regular, have dropped to 77 cents at one station in Houghton Lake, Michigan, according to GasBuddy. The price is due in part to a price war. Two stations close by are selling regular for $.95 a gallon.

Iran sanctions have been lifted which will wash the world with more oil. By some estimates, the country can export 500,000 barrels a day. The current national average is $1.90. As crude collapses toward $25, gas prices are on their way down, again.