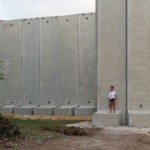 After the Aug 26th cease-fire between Israel and Hamas went into effect, returning families of Kibbutz Yad Mordechai, near Gaza, were greeted by an unpleasant surprise: their kindergarten had turned into a gray security fortress, Israel’s Channel 2 News reported Wednesday.

“We went back just after the war and we were horrified,” kibbutz member Ronit said.

“It not only looks bad, but these concrete barriers are blocking the air and light for children,” she said, arguing that, “It makes no sense to go to such conditions. The garden was crushed and the sandbox was destroyed. These concrete blocks are terrible.”

The veteran kibbutz, which was established before the 1948 War of Independence, lies just 2.5 kilometers north of the coastal enclave, and has been a regular target of terrorist projectiles for the last 14 years.

According to the parents, the Home Front Command told them that temporary shelters will have to serve as protection until a fully rocket-proof kindergarten is built – in three years.

“Three years is a long time in the life of a community, certainly when it comes to preschools,” outraged kibbutz members said, and demanded that the work begin immediately.

Kibbutz Secretary Shauli Sankar expressed solidarity with the parents, but said that “the kibbutz has been subjected to two bad choices – either massive, or a lack of, protective armor.

“We expect that the budget will be directed to the protection of the buildings immediately,” Sankar said, and explained that it all depended on the budget timing and estimated that it would take about eighteen months until the new, reinforced facility arose.

“Until that happens, every effort will be made to beautify the walls as much as possible,” he noted.