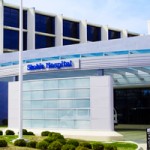 A frum man is suing Skokie Hospital for cremating his amputated leg instead of preserving it for kevurah as he requested, the Chicago Tribune reports. Moshe Lefkowitz, 43, had surgery to remove his left leg below the knee in March 2011. He said in a lawsuit filed in court in Cook County that he made his wishes to preserve the leg known to the medical staff and a hospital chaplain.

Moshe sued Skokie Hospital and the chaplain last year for more than $100,000 in damages. The suit was dismissed by a Cook County judge, but an appeals court reversed that ruling late last month and sent the case back for trial.

The hospital denied any wrongdoing, saying in court papers that Moshe twice signed consent forms, including two days before the surgery, that gave the hospital permission to dispose of his leg. Moshe said in a sworn statement that he’s legally blind and alleges that a nurse explained that the form he signed was just giving his consent to the surgery.

The hospital also said Moshe should not be permitted to sue the chaplain for what it called “clergy malpractice.”

“There is no place for Plaintiff’s religious contentions in the civil court system,” the hospital’s attorneys argued in an appellate brief.

Moshe’s attorney said in court papers that he is not making a religious claim but rather is suing the chaplain for negligence for failing to inform the proper hospital staff.