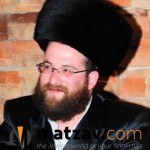 A 40-year-old Jewish man was stabbed tonight in Milan, Italy, near the Carmel kosher restaurant.

R’ Nosson Graff was walking in the Lorenteggio District at around 8:15 p.m., reports JP Updates, when a man with a covered face came up from behind him and stabbed him at least nine to ten times including on his face and his back. The most serious wound was a stab in Nosson’s face.

Emergency services rushed Nosson to the Niguarda hospital, where he was listed in stable condition.

His attacker fled from the scene and police are reviewing surveillance video. Witnesses told police that the suspect fled with two other men in a car.

“The attack took place right next to our community,” says the co-president of the Jewish community in Milan, Raffaele Basso. “From what we have known, the victim was returning home when suddenly he was reached for by a hooded man who has inflicted numerous stab wounds. Fortunately, he is out of danger. Now ,investigators are verifying the existence of records of any security cameras. ” He adds: “We have not received threats; but in recent times there have been attacks on Jews in America and in Europe and this is the first time that an incident of this gravity happened in Italy.”