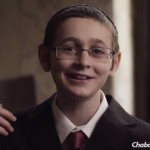 Mendel Hurwitz woke up Tuesday morning to find himself a viral sensation.

The 15-year-old son of Budapest-based Rabbi Sholom and Devorah Leah Hurwitz of Chabad, was profiled in the series premiere of “Belief”; a seven-part series produced by Oprah Winfrey’s OWN television network that explores world religion.

The episode documents Mendel’s bar mitzvah two years ago and his newfound status as an adult in the eyes of the Jewish community.

The Internet, it seems, was smitten with Mendel’s personality, charm and deep-felt commitment to his Jewish heritage. In fact, Hurwitz was the only subject whose story Oprah herself tweeted about after the premiere.

“Every stage in your life you have a different purpose, but you have to do it in a stage.” -Mendel #Belief @OWNTV

While filmmaker Ava DuVernay noted the surprising sense of closeness and connection that could be felt with Mendel:

Never thought I’d feel connected to a sweet little Jewish boy in Europe. But I am. Hugs to you Mendel! #Belief

Others kvelled that Mendel was their “favorite” or as Variety’s editor Debra Birnbaum quipped, “My father would have loved Mendel’s story.”

I loved the Mendel story so much because it represents right of passasge. ” bye bye to childhood”.#Belief

In the meantime, Mendel, who studies at the Chabad-Lubavitch Tzeirei Hashluchim yeshivah in Tzefas, Israel, seems to feel a deep sense of responsibility about the role he played.

Speaking with his father, Rabbi Sholom Hurwitz, Chabad.org was told that Mendel viewed the coverage as a “chance to make a positive impression about Jewish life to the world, and share the meaning he finds in Jewish life and observance.”

“I was so impressed with Mendel’s confidence and poise at the time,” the elder Hurwitz said. “He realized that for many viewers, this may be their first look at the life of a Chassidic Jew, so he took to the role with great pride.”