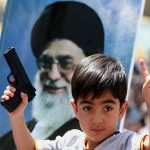 An Israeli legal rights NGO warned 11 American bank branches that they remain liable to compensate families of victims of Iranian-sponsored terrorism from frozen Iranian bank accounts, despite the lifting of sanctions on Iran following the July’s nuclear deal.

The Shurat HaDin – Israel Law Center sent letters warning the U.S. branches of the foreign banks that the $100-150 billion in frozen oil revenue should continue to be held for terror victims in spite of the Obama administration’s plans to lift sanctions on the accounts.

“You are hereby warned that all accounts maintained by your financial institution at any of its branches in the name of Iran, the Central Bank of Iran, the Naftiran Intertrade Company, the National Iranian Oil Company, the National Iranian Tanker Company or any other agency or instrumentality of Iran are restrained and subject to a lien in favor of my clients under United States law,” the letters state.

Though Iran negotiated with America to lift sanctions on the bank accounts, Iran’s ability to recoup the funds was blocked in October by a “Citation to Discover Assets” that was filed in the federal district court for the Northern District of Illinois.