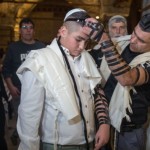 The young Israeli boy who was injured in the infamous stabbing attack that took place in the northern Yerushalayim neighborhood of Pisgat Ze’ev two months ago celebrated his bar mitzvah on Thursday afternoon at the Kosel in the Old City of Yerushalayim.

Naor Shalev, a Mifal Torah Vodaas student, was left in critical condition after he was stabbed on October 12 while riding his bicycle by two Palestinian boys, ages 14 and 13. Despite the traumatizing experience, Naor offered his own words of inspiration in light of his 13th birthday.