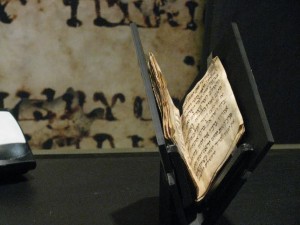 It was a historical moment at Yerushalayim’s Bible Lands Museum tonight as the world’s oldest known siddur was displayed for the first time to the general public with leading Jewish and Christian figures present. The siddur, which is 1,200 years old, belongs to Steve Green of Oklahoma, who owns the largest private collection of biblical artifacts in the world, with over 44,000 rare texts and biblically-related objects.

This siddur will be displayed for one month in the Book of Books exhibit, the internationally-acclaimed exhibition which displays the most important biblical texts and traces the history of Torah and the dissemination of the monotheistic faith. On display are exquisite illuminated manuscripts, rare fragments from the Cairo Geniza and original pages from the Gutenberg Bible.

“We are honored to have the prayer book in our Book of Books exhibition. The book is evidence of a thriving and creative community and cultural life 1,200 years ago,” said Amanda Weiss, the Director of the Bible Lands Museum. “We want to give the world the opportunity to see this remarkable piece of document.”

The 50-page siddur, still with its original binding and cover, is written in Hebrew and contains three main parts; Shacharis, pizmonim and the Haggadah Shel Pesach. It dates back to the first half of the Ninth Century AD during the period of the Babylonian Geonim. It was during this period that Amram Gaon, one of the leading Geonim, wrote an orderly liturgy for the first time used for both the shul and home. The siddur originates from the Middle East and has undergone sophisticated carbon-test dating methods to validate its age.

“Scholars have yet to fully research the prayer book,” added Weiss, noting that that there are experts around the world studying high-quality digitalized versions of the siddur.

Green purchased the siddur over a year and a half ago for his Oklahoma-based collection but the siddur will eventually be permanently hosted at the Museum of the Bible which is currently under construction in Washington D.C. Before the siddur was purchased by Green, it was originally in the hands of a private family for many generations according to Weiss.

“I know that the Jewish people have a great appreciation for this prayer book,” Green told Tazpit News Agency. “It’s been through many travels and I’m glad that it has made its way here to Jerusalem,” he added. Green, who is Chairman of the Museum of the Bible, stated that he grew up in a ‘Bible-loving family’ of Christian ministers and wants to cultivate appreciation for the Bible worldwide.

Among those present at the unveiling of the siddur at the Bible Lands Museum on Thursday night was Speaker of the Knesset MK Yuli Edlestein.

“Not only are we the ‘People of the Book’, we are the people of the same book, the same language and the same prayers,” said Speaker Edelstein. “These are the exact same words millions of Jews say every morning and this is the best example of Jewish continuity.”