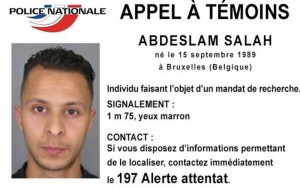 French police have identified the suspect in their international manhunt as 26-year-old Adbeslam Salah who was born in Brussels, Belgium.

Two of the suspects who were killed during the attacks were from France but living in Belgium.

Seven people were also arrested in Brussels and are currently being questioned about their possible involvement in the coordinated attacks. Only seven of the eight identified attackers died, six from suicide bombs and another in a shootout with police.

AFP reported that three brothers are involved in the investigation. One died in the attacks, while another is in custody in Belgium and it is unclear if he acted in the attacks. The third could be the suspected individual currently on the run. Read more at ABC News.