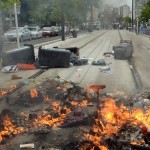 Anti-Israel protests led by French youth went from calm demonstrations to fiery riots over the weekend. The government had previously banned such protests, but that only appears to have incited more demonstrations. Youth in Sarcelles, which is north of Paris, set fire to cars and garbage cans on Sunday.

Jewish youths responded by encircling a shul and protecting it with iron bars.

This month has seen a number of attacks on Paris shuls, including one in which an entrance was firebombed.

On Shabbos, thousands in Paris marched while chanting “Israel, assassin.” Rallies also popped up throughout the country, including in Lillies and Marseilles. France has been grappling with an increase in anti-Semitism over recent years, and Prime Minister Manuel Valls denounced a “new form of anti-Semitism” spreading among youth. Read more.