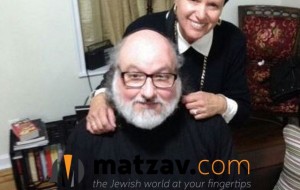 Early this morning, Jonathan Pollard was released in North Carolina after 30 years in a prison.

Pollard is a former U.S. Navy analyst who was arrested in 1985 for stealing secrets for Israel. He eventually reached a plea deal with federal prosecutors, and he received a life sentence in 1987. Today, Pollard was released from a federal prison in Butner, N.C., where he served the bulk of his jail term.

Matzav.com was the first news source worldwide to report on Pollard’s release on parole based on information received exclusively this past summer.

Pollard will be required to wear an ankle monitor while he completes five years of parole in the United States.

Now at 61, early half of Pollard’s life was spent in prison.

“The people of Israel welcome the release of Jonathan Pollard,” Netanyahu said. “May this Sabbath bring Jonathan Pollard much joy and peace that will continue in the years and decades ahead.”