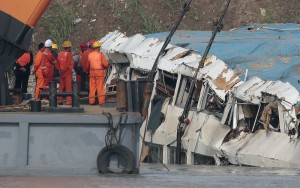 It was just revealed that an investigation into the sinking of a Chinese cruise ship on the Yangtze River in June found that the incident happened because of “freak” strong winds and heavy rain.

Nearly 450 people were killed when the Eastern Star capsized while traveling from Nanjing to Chongqing.

The inquiry into the incident also named 43 junior officials as being partially responsible and recommended that authorities investigate the captain for possible charges.

The sinking is considered of China’s worst ship disasters in more than six decades.

Investigators said that while the ship had enough life vests on board for its passengers, the company managing it did not properly monitor its condition. Read more at BBC.