[Multiple updates below. Video links and photos below. Tehillim commitments in comments section. Surveillance video below.] Monday, 11:36 p.m. EST: Shomrim volunteers from around Brooklyn, NY, are in the midst of an mid-night comprehensive search effort for a young boy who never returned home after attending day camp today.

Nine-year-old Leiby Kletzky of Boro Park, Brooklyn, was dismissed from the Boyaner Boys Day Camp on 44th Street, between 12th and 13th Avenue, today shortly before 5 p.m. He was spotted on surveillance video proceeding up 13th Avenue but hasn’t been seen since.

The New York City Police Department has joined the frantic search and the Boro Park Shomrim have formed a command center to handle the activity.

The public is asked to daven for the safe and quick return of Yehudah ben Itta Esther.

Click here for video of the search command center.

The search continues for Leiby, who has yet to be found. There is a mass communal effort to find the boy, with dozens of volunteers 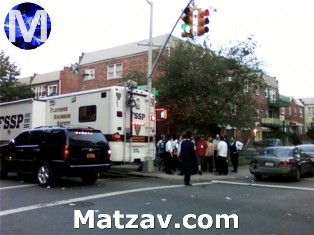 being dispatched across Boro Park and Flatbush. The search will intensify in the next couple of hours as stores open and camps begin their day.

Leiby has been missing for over 12 hours. Leiby, we are told, was supposed to meet his mother at 5 p.m. on Monday after leaving his Boyaner Day Camp but never showed up.

Those with the Flatbush Shomrim Safety Patrol said they’ve seen the aforemented surveillance video that shows the little boy leaving the camp, but there was no sign of him otherwise.

2,000 people are searching for Leiby, checking every backyard, every front yard, every possibility, said search coordinator Shi Lichtenstein. Foul play has not been ruled out.

Update, 10:18 a.m. EST: Assemblyman Dov Hikind has released the following statement: The Assemblyman is offering a $5,000 reward to anyone with information leading to the safe return of nine-year-old boy Leibby Kletzky who never returned home from Boyan Day Camp located at 44th Street between 12th and 13th Avenues after camp ended yesterday. The boy was last seen on surveillance footage at 13th Avenue until 50th Street. According to published reports, Leibby was last seen wearing “a grey and light blue striped shirt, navy pants, black sneakers and a knapsack bearing the words “Nechmod Day Camp” at the time of his disappearance.”

“This is every parent’s and every community’s worst nightmare,” said Hikind. “Anyone with credible information of Leibby’s whereabouts should immediately contact the authorities. NYPD and the Shomrim are working in tandem to bring about Leibby’s safe return.”

Hikind praised the tremendous efforts of the NYPD; the Boro Park, Flatbush, and Williamsburg Shomrim; as well as hundreds of volunteers who have been combing the area searching for Leibby since last night. The Shomrim have set up a command center at 15th Avenue and 57th Street.

“Somebody had to have seen something,” remarked Hikind. “Even the tiniest detail that may seem irrelevant to you could be a vital piece of information.”

Update, 11:37 a.m. EST: Assemblyman Hikind has now been joined by two anonymous community leaders, raising the offered reward to $25,000 for anyone with information leading to the safe return of nine-year-old boy Leibby Kletzky who never returned home from Boyan Day Camp located at 44th Street between 12th and 13th Avenues after camp ended yesterday. According to published reports, Leibby was last seen wearing “a grey and light blue striped shirt, navy pants, black sneakers and a knapsack bearing the words “Nechmod Day Camp” at the time of his disappearance.”

“I continue to encourage anyone with credible information to please come forward,” pleaded Hikind. “This could easily be your child or grandchild. Help us to help find Leibby and bring him home safe and sound.”

Update: 2:20 p.m. EST: The reward for information leading to the missing boy is now $100,000 as two anonymous community leaders have joined in opening their wallets in the hopes that the large sum will entice someone to come forward with info.

See below for photos of the search:

Update: 4:35 p.m. EST: Almost 24 hours have passed since Leiby Kletzky was last seen, but thus far, thousands of volunteers have come up empty. All are asked to continue davening and learning as a zechus that Leiby will be found safe and sound, soon.

Update, 6:23 p.m. EST: There have been rumors spreading across the internet via Twitter, Facebook and other sites. Virtually all of the rumors are false. Shomrim coordinators tell Matzav.com that, unfortunately, there is not much info to report at this time.

Furthermore, there have been conflicting reports regarding the credibility of claims that Leiby was idenitified in surveillance video shortly after he had left the Boyaner Day Camp. We are told that Leiby was indeed seen on video obtained by police, but it is unclear what value, if any, it will have as the desperate search continues.

The search continues to be manned from the Shomrim Command post at 15th Avenue and 57th Street in the heart of Boro Park.

Members of Lakewood’s Civilian Safety Watch, Williamsburg Shomrim, Flatbush Shomrim, and others are participating in the ongoing search as evening approached.

Stay with Matzav.com for continuing coverage of this story.

Update, 8:00 p.m. EST: The search has been extended to include the Flatbush area, with a Shomrim Command Center established at Avenue M and East 12th Street, off of Coney Island Avenue.