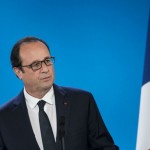 President Francois Hollande said France has agreed to carry out air strikes Iraq requested to boost its fight against ISIS fighters who have taken over swaths of Iraqi territory in a quest to create an Islamic caliphate. He insisted that the French government will not go beyond air strikes, and would not attack targets in Syria, where the ISIS extremists also have conquered territory. Hollande said he approved the strikes during a meeting with his top defense and security advisers on Thursday.

The decision boosts the Obama administration, which has been seeking more help from European and other allies in a multinational campain to destroy ISIS. Read more.