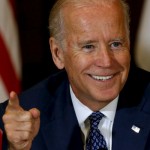 There is no indication as to when Biden would begin his candidacy, but other outlets have reported that he will make an announcement within the next 48 hours.