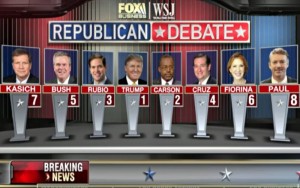 This means that Chris Christie and Mike Huckabee — two candidates previously included in the primetime debates — have fallen to the so-called “undercard” event, airing at 7:00 p.m. ET. They will join Bobby Jindal and Rick Santorum as the lone four candidates to meet the criteria of at least a one-percent average in polling.

Gone entirely from the debate stage are Lindsey Graham and George Pataki.