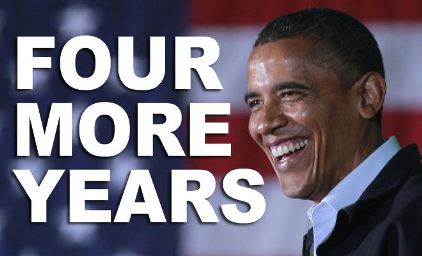 [Update below.] President Barack Obama is on the verge of winning a second-term to night, defeating Republican Mitt Romney in a series of close battleground state contests, according to network projections.

Some prizes–Florida, Ohio and Virginia–are still too close to call, but there are encouraging signs for Obama because of still-to-be counted votes in Democratic strongholds there.

In Florida, Obama clings to a narrow lead, but Democrats are encouraged that the votes remaining to be counted come from South Florida counties where the president enjoys his strongest support.

Likewise in Ohio, thought to be the most closely contested state in the election, Obama has a slight lead with many votes still to be counted in the urban areas where he is strongest.

Romney has a lead in another battleground state, Virginia, although the Democrats held onto the Senate seat being vacated by retiring Sen. Jim Webb (D.) Former governor and senator George Allen (R) conceded the race to another former governor, Tim Kaine, shortly before 11 p.m.

In early results, Obama won his home state of Illinois as well as Massachusetts, where Romney was governor and the place he still calls home. Maryland and the District of Columbia were put in Obama’s column as soon as polls there closed.

Romney is winning across the South, plus West Virginia, Indiana and Oklahoma – traditional Republican states in the presidential contest.

Democrats are having a good night in Senate results, where it appeared likely they would hold onto their majority in the chamber. Democrats in early returns picked up two seats and had the possibility of a third.

Early exit polls showed, not surprisingly, that the economy was the most important issue for Americans who have lived through a devastating recession. They told pollsters that they were slightly more positive about the country’s direction than when they chose Obama four years ago. But their interest in a more activist federal government has been dampened.

The polls also suggest a slightly more Republican electorate than in 2008.

The polls also gave both men reason for concern, and cause for optimism.

Despite their worries, more people think the economy is getting better than getting worse, according to the polls, and more blame former President George W. Bush for the economic woes than Obama.

More people trusted Obama to look out for the middle class than trusted Romney, and more favored Obama’s prescription for deficit cutting, which involves higher taxes on the wealthy.

But about a third of the electorate appears to be made up of independents. Obama won their support four years ago, but the early results showed them breaking for Romney this time.

The prize of the night is Ohio – no Republican presidential candidate has ever prevailed without the state in his column. Early exit polls indicate the electorate might be slightly more favorable to the president.