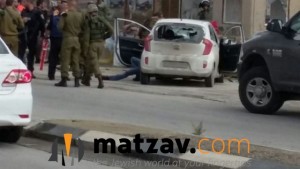 [Video below.] Four Israelis were wounded, two of them seriously, in a car-ramming terror attack at Tapuach Junction in the West Bank this morning.

A group of Israeli youths was waiting for a bus at the site. The driver approached the intersection, then accelerated into the waiting crowd, according to witnesses and police.

The wounded were all evacuated to Beilinson Hospital in Petach Tikva.

The Magen David Adom rescue service confirmed that the victims were all civilians.

The two who were seriously injured were men in their 20s. They suffered from wounds to their extremities and were fully conscious and in stable condition.

A woman, also in her 20s, was lightly injured in the attack.

A fourth Israeli was struck by gunfire from a police officer who was attempting to target the driver of the car, and sustained light to moderate wounds.

The driver, identified by authorities as a Palestinian, was shot and killed by Border Police forces at the junction.

The junction, a major intersection on Road 60, is closed to traffic from all directions.