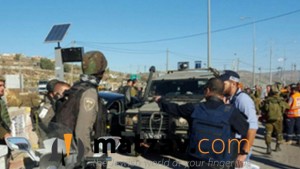 A man in his 20s suffered serious wounds in the suspected attack, while two more are lightly to moderately wounded, Times of Israel reports.

Security forces are searching for the car involved in the attack. Roadblocks are placed on several roads in the area.

Update: The Palestinian terrorist who carried out the attack rammed into a group of young Israelis in their twenties who were standing near the entrance to the Beit Aryeh community. After that, the terrorist fled the scene of the crime.

Magen David Adom arrived on site and provided initial medical treatment to the four wounded young people. Among them, one was moderately injured and the rest were slightly injured. Security Forces have arrived to the area in order to hunt for the terrorist.
Earlier today, a one and a half year old baby was injured after Palestinian terrorists threw stones at a car near Beitar Illit. The baby was evacuated to receive medical treatment at Shaare Zedek Hospital in Jerusalem.
{Matzav.com Israel}