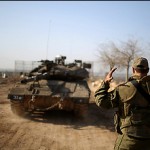 Four Israel Defense Forces soldiers were injured today when an explosive device detonated under their patrol jeep near the Israeli-Syrian border.

According to the IDF, soldiers patrolling the border had identified suspicious movement.

One solider was seriously hurt while the other three sustained light-to-moderate injuries. All of the soldiers were brought to Rambam Hospital in Haifa.

In response to the attack, the IDF returned artillery fire into Syria and hit several sites, including a Syrian army base.

“The IDF retaliated toward Syrian military positions,” the IDF said in a statement.

Israeli Prime Minister Benjamin Netanyahu said the attack came amid an influx of jihadists and Hezbollah members near the border area. He added, “In the past few years, we’ve succeeded in keeping the peace in the face of the civil war in Syria, and here too we will act forcefully to maintain Israel’s security.”

The Israeli government has also notified the United Nations’ peacekeeping force that patrols the Israeli-Syrian border of the incident.

“We see the Syrian army as responsible, and that is indicated by our response to the attack,” said IDF spokesman Lt.-Col. Peter Lerner, Reuters reported.