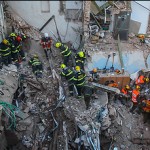 Four people were killed this morning in a gas explosion at a residential building near the northern port of Acre. Two of the victims were in their 20s, according to Yediot Achronot.

The loud explosion was heard at around 2 am in the city, close to the police station in the Old City. The building collapsed as a result of the damage.

While the gas cylinder appears to have set off accidentally, police have not ruled out criminal motive. An emergency services command post was established at the entrance to the Old City, and 18 firefighter crews were dispatched to the location.