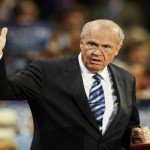 Fred Thompson, a former U.S. senator for Tennessee, died in Nashville on Sunday. He was 73. The Watergate attorney and Republican presidential candidate passed away after a recurrence of lymphoma, according to a family statement.

“Fred believed that the greatness of our nation was defined by the hard work, faith and honesty of its people. He had an enduring belief in the exceptionalism of our country, and that America could provide the opportunity for any boy or girl, in any corner of our country, to succeed in life,” the statement read.

The 6-foot-6 was chief minority counsel on the committee investigating the Watergate scandal and served in the U.S. senate for eight years. Read more at The Tennessean.