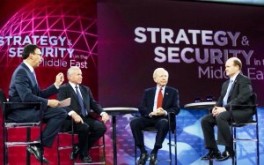 [Video below.] The former head of Israel’s Shin Bet intelligence service, Avi Dichter, suggested on Sunday at the start of the AIPAC policy conference that if talks between Iran and world powers couldn’t bring the Islamic Republic’s nuclear program to an end, military action would.

“There is no debate amongst the intelligence services word-wide about the seriousness of Iran to build (a) nuclear weapon,” Dichter said. His approach to the problem: “If you cannot deal it, kill it.”

“Iran intends to destroy the State of Israel,” he said, adding that Iran tells its own people that its plan would be to return citizens who came to the Jewish state since 1948 to where they had originally come from.

Dichter’s family were from Poland, making aliyah after the Holocaust and would not be returning to Europe, he said. “That’s not going to happen, for sure,” Dichter said.

Coons said the bottom line for his position in the current talks with the regime is that “Iran has no pathway to a nuclear weapon.”

Lieberman agreed, but also concluded that the current approach by U.S. President Barack Obama had “zero chance of succeeding.”

Watch a video of the panel discussion here.