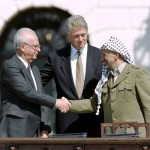 Clinton is scheduled to speak at the event commemorating the 20th anniversary of Rabin’s death on November 4, 1995, when he was shot by Jewish extremist Yigal Amir, in the same square that hosts the yearly memorial. Rabin was attending a peace rally in support of the Oslo Accords.

The memorial will conclude a week of events in Israel commemorating Rabin’s legacy, including a ceremony at Mount Herzl, Rabin’s burial site and a special Knesset session.

Clinton attended Rabin’s funeral following the assassination and ended his emotional eulogy with the words “Shalom, chaver,” or “Goodbye, friend.”

In an interview with Israel’s Channel 2 in 2013, broadcast for the first time on Monday to coincide with the 20th anniversary of Rabin’s death, Clinton said that if Rabin had not been killed he would have been able to reach a peace deal within three years, because “the Palestinians trusted him.”

Visibly emotional during the interview, Clinton said that he “really loved the man” and that he had expected they would both “live 20 more years, and I would come here [to Israel] and see him every chance I could.”

“They [the Palestinians] didn’t think he was a pushover in negotiations,” Clinton said. “They knew that they would have to bargain hard for as much of the West Bank as they could get, for the details on how long the Israeli security forces would be along the Jordan River — they knew all those issues would have to be negotiated. But whatever the deal was, they were absolutely convinced he was 100 percent certain to do whatever he promised to do.”

During the interview Clinton recalled a dispute relating to a road in the Jericho area on one of the maps used in negotiations for the Oslo accords.

According to Clinton, Rabin agreed to a change that was not included on the maps. He said that then Chairman of the Palestine Liberation Organization, Yasser Arafat, accepted Rabin’s verbal promise to the change, saying Rabin’s word was “worth more than any written contract.” That level of trust, said the president, “is inconceivable today.” Arafat “just knew that Rabin’s word was good.”

Asked about the moment he heard that Rabin had been shot, Clinton said, “I ran upstairs to see my wife…We literally just sat there and held each other for, like, 20 minutes.”

“My first thoughts were not even for the peace process, they were just for my friend,” he continued.

Clinton said he thought “of how many of us wished that we could have stopped it; jumped in the way.”