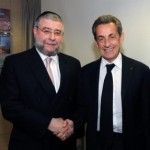 “We did not fight the Nazis to force the Jews to run to Israel 70 years later,” declared French President Nicolas Sarkozy before an awards ceremony for the Conference of European Rabbis.

“We do not want French Jews to leave France because they are afraid. We want them to be comfortable to wear a kippah. We must stand up to protect our Jewish communities. It is impossible not to,” he told the gathering of Orthodox Jewish leaders from across Europe.

According to the Israeli Immigration Ministry, more than 7,000 French Jews underwent the immigration process to Israel last year — a record breaking number. French Jews were by far the biggest national group in Western Europe, where the next largest group numbered just above 600, from Britain.

Many have said the large immigration numbers stem from the apparent rise in antisemitism generally in Europe and particularly in France, which also boasts Europe’s largest Jewish community.

On Saturday, Paris commemorated one year since a terrorist with links to ISIS stormed a kosher supermarket and killed four hostages. After the attack, the French government said it would invest over 100 million euros in combating antisemitism, and also assigned security forces to protect hundreds of Jewish institutions and gathering places across the country.

Still, French authorities reported an 84% increase in antisemitic hate crimes in the first five months of 2015, compared to the same time the year before, and some French Jews still wonder whether the country is safe for its Jewish community.

Sarkozy’s comments echoed sentiments by French Prime Minister Manuel Valls who spoke at the one year memorial of the HyperCacher supermarket attack on Saturday night. Valls said it was an “unbearable idea” that Jews would not feel at home in France and that France without a Jewish community was not France.

Sarkozy was accepting the Rabbi Moshe Rosen prize at the 2015 Internet Entrepreneur Prize Award Ceremony, where this year’s winner was Rize — a program which, according to a statement by the CER, “integrates therapeutic concepts into interactive tutorials and exercises to help understand, track and improve your mental well-being.” Rize was awarded a €26,000 cash prize.