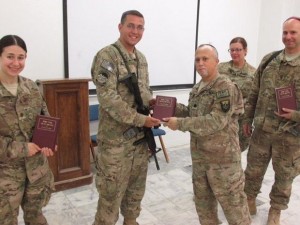 The congregation this summer took on a campaign to send Jewish troops stationed in Afghanistan hard-to-find comfort items such as snack foods, batteries and toiletries. Along the way, members of the shul learned that the soldiers were in need of siddurim.

Rabbi Akiva Males and the congregation’s leadership realized that their shul, which once boasted a larger membership, had surplus siddurim not being used. One thing led to another and by mid-August, they had prepared a shipment of 40 machzorim.

Rabbi Males coordinated the effort with Lt. Col. (Rabbi) Shmuel Felzenberg, a U.S. Army chaplain, stationed in Afghanistan. Felzenberg, who was the one who had informed Males of the shortage in prayer books in the first place, recently e-mailed him to inform him that the shipment of books had arrived, just in time for the Yomim Noraim.

“Kesher Israel is proud to have played a significant role in enabling our country’s brave servicemen and women stationed in Afghanistans to celebrate this year’s High Holidays,” Rabbi Males said. “I thank everyone who helped make this wonderful project possible.”

Rabbi Males takes delight knowing that the machzorim will likely stay with Felzenberg, traveling with him from one deployment after the next. He is additionally pleased that the machzorim bear a congregational book plate, which reads that they come from Kesher Israel Synagogue in Harrisburg.

“I find it kind of exciting,” Rabbi Males said. “Who knows where they will end up? Who would have thought prayers books that started in Harrisburg would have ended up in Afghanistan.”