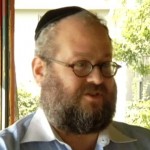 A toxic shirt worn during rescue efforts after 9/11 was stolen from a Miami man’s car on Wednesday and now the thief may be in danger, the Daily Mail reports.

Yehuda Kaploun, who lived in Manhattan during the terror attacks on the World Trade Center, wore the shirt for hours as he looked for survivors at Ground Zero.
Kaploun never washed the shirt, sealed it up in a bag, and threw it in his closet. 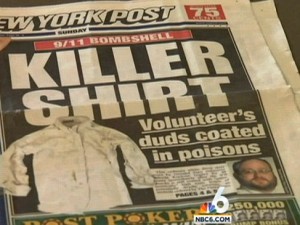 NBC reports that the shirt previously made news in 2006 in a story about medical benefits for first-responders.

‘If that person who had that shirt, or touched that shirt, he’d be very smart in seeking immediate medical attention,’ Kaploun said. ‘The shirt is covered in toxins, the asbestos, the lead, the zinc, whatever was in the air at that time when the buildings came down, the construction material,’ he added.

The toxic shirt was going to be in a news story again as Congress again debated on health benefits awarded to those who helped post 9/11. He put the shirt in his car in a box to send to a reporter on Wednesday night and then it was gone.

‘I would have to call it the world’s stupidest criminal because he really is putting his life in danger and if he’s opened up the bag he definitely exposed himself to tremendous toxins,’ Kaploun said.

Kaploun filed a police report but he doesn’t think he’ll be seeing the shirt anytime soon.