In a recent FaceBook post that was re-tweeted on Matzav.com earlier this week, O’O-Rabbi Shmuly Yanklowitz falsely states that Rav Ovadia Yosef recommended praying in a mosque over praying alone.

This is patently false. Rav Ovadia never made such a ruling. He never mentions it in any of his responsas – neither in “Yabia Omer” nor in “Yechaveh Daas.” This is a falsehood that O’O’-Rabbi Yanklowitz came up with to justify him going to have a joint prayer session at a mosque together with Moslems.

So where did he get it from? This author suspects that he had casually misread a website that quotes Rav Ovadia in permitting davening at Maaras HaMachpela. He has the audacity to attack that other website by writing, “What they don’t know is that Rabbi Ovadia Yosef writes… etc.” In the meantime, he has besmirched the name of a leading Posaik by attributing false halacha to him.

The website passage that this author suspects that the O’O’Rabbi misread states as follows:

Is a Jew Permitted to Enter a Mosque or Church in a Case of Great Need?
Question: May a Jew enter a mosque or church when there is a need to do so or to visit there as a tourist attraction?

Summary: It is absolutely forbidden to enter a house of idol worship. Included in this prohibition is entering a Christian church or other kinds of houses of idol worship in the Far East. Nevertheless, there is no halachic prohibition to enter an Arabic Muslim mosque; this is especially true when this is being done in order to pray there, such as at the graves of our forefathers in the Machpela Cave in Chevron.

It is this last line of this link and the title [and the fact that No where in his vast writings does Rav Ovadia zatzal say what Yanlowitz has him saying) that indicates to this author the source for his mistake.

So please, please, if you are reading this – do not erroneously read websites in your attempt to state halacha. You should also apologize for the falsehood.

In another development, Rav Shlomo Miller, one of the leading Poskim in North America, released a request that Orthodox Jewish news media should refrain from using the term “Open Orthodox” when describing this movement – because they are not Orthodox and it is misleading. Rav Miller added that their commitment to halacha is similar to that of the Reform movement when they first started.

Here is the letter from Rav Miller: 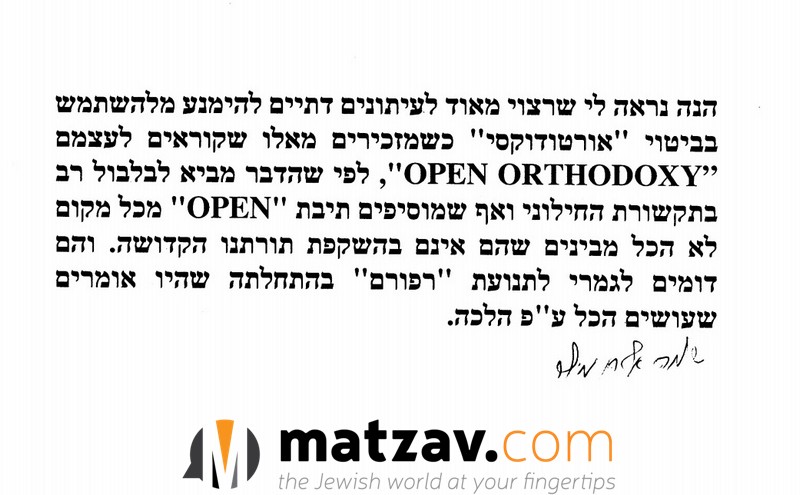 The author can be reached at yairhoffman2@gmail.com.