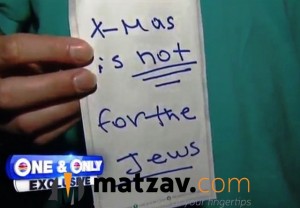 Now police are investigating the notes found since Shabbos and are trying to find the person responsible for leaving them in at least three private mailboxes. One of the notes read “X-Mas is not for the Jews.”

“I think it’s somebody who has serious hate issues, and even if they think it’s a joke, it’s not something to joke around about,” said Greg, one of the neighbors who received a note in his mailbox and wishes only to be identified by his first name.

Malky Goodman, who is the wife of a rabbi, also found a note inside her mailbox. Goodman’s note read “[What] is on your roof? #x-masisbetter.” The note is referencing a decorative menorah Goodman puts on top of her car.

“It’s just heartbreaking. It hurt my heart. It hurt the whole community’s heart,” Goodman said. “Jewish or not Jewish, we live among each other and we have peace among each other, and this should not happen in a community like this.”

The neighbors who were targeted by the hateful messages said they won’t be taking down any of their decorations. In fact, they plan on purchasing more.