Marking ten years since the end of the rescue and recovery operation at the World Trade Center site on May 30th, 2012, Assemblywoman Helene Weinstein joined Assembly Speaker Sheldon Silver and Assemblyman Michael Den Dekker  at an Assembly ceremony honoring a few among the thousands of New Yorkers who had worked countless hours in extremely daunting and difficult conditions.

As one of a handful of individuals and organizations, Flatbush Hatzoloh and its dedicated volunteers were chosen for special distinction by Assemblywoman Weinstein for their response following the devastating attacks. 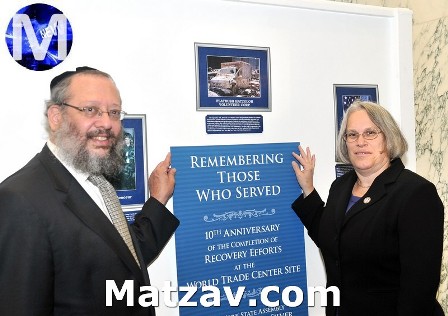 “These dedicated individual chose to put themselves in harm’s way in order to assist in the treatment and transport of the thousands of victims involved in this horrific event,” said the Assemblywoman. “The least we can do is to thank them in every way we can and allow their acts to serve as a beacon for selflessness and compassion.”

A plaque acknowledging Flatbush Hatzoloh’s actions was displayed in the New York State Assembly building as part of a group of exceptional memorial displays throughout the Capital which commemorate the 9/11 tragedy. The plaque, accompanied by the iconic image of a Hatzoloh Ambulance covered in debris and ash, reads:

“On September 11th, 2001, 137 volunteer EMT and paramedic members of Flatbush Hatzoloh Inc. rushed without a moments thought to assist the authorities at ground zero immediately following the horrific attacks. Using all six ambulances in their fleet as well as personal vehicles they selflessly aided in the treatment and transportation of numerous victims and helped in the evacuation of hundreds of more. As part of galvanized effort by the greater Chevra Hatzoloh network of 35 ambulances, 250 EMT’s and 55 paramedics, this was the largest response to the tragedy after those by Port Authority Police Department, the FDNY and NYPD.”