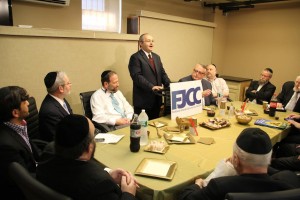 The FJCC is making a final plea to the Flatbush electorate to vote in today’s NYS Primary. Tens of thousands of flyers were distributed through the Yeshivas and Bais Yaakovs, posters were placed, and over 100,000 emails and phone calls were made to insure that the Flatbush Jewish community knows that today is Primary Day. But the bottom line as always is voters making a personal effort to get to the polls before 9:00 PM. According to reports, turnout so far has been extremely light across the State making each and every vote important.

The Cuomo- Hochul Ticket has been active over the past few weeks in reaching out to Jewish communities across the NY Metropolitan area. Governor Cuomo upon his return from his highly regarded trip to Israel, personally briefed Jewish communal leaders on the specifics of his Israel mission. FJCC executives Josh Mehlman, Leon Goldenberg and Chaskel Bennett were in attendance. The Governor’s running mate and candidate for Lieutenant Governor Kathy Hochul, visited with members of the FJCC leadership this past Sunday in the home of FJCC executive board member, Shimon Lefkowitz. Ms. Hochul related her experiences as a congressional representative from the Buffalo area and reiterated her strong support for Israel and understanding of other issues important to the orthodox Jewish community like education, affordable housing and small business growth. She elaborated on the Governors platform to continue efforts to increase assistance to Yeshivas and pledged to be an active advocate for the Jewish communities interests in Albany. Ms. Hochul, a long- time community activist before getting into public service, complemented the unity and advocacy of the FJCC Flatbush Coalition in effectively representing the Orthodox communities of South Brooklyn and pledged to return to Flatbush if honored with the job of Lieutenant Governor.

Recently, the FJCC hosted a forum to interview candidates for the two Assembly seats in the area. That event come on the heels of numerous smaller meetings and forums held over the summer with various candidates for State Assembly, County Committee, Judges and other local offices.

Running in the 42nd Assembly District to replace the retiring Assemblywoman Rhoda Jacobs are Rickie Tulloch and Rodneyse Bichott. Both are members of the African American community, and both are seeking the support of Orthodox Jews living in the district. FJCC members used the opportunity to vigorously question both candidates and seek their positions on high priority communal issues. Education assistance for private schools and support for special needs children dominated the conversation. Both candidates expressed their desire to represent the needs of the Orthodox community in Albany. While this initial exchange was a good start, future meetings are being planned, past the election, to advocate on the issues that matter most to the Flatbush Jewish community.

The 45th AD is currently represented by Steve Cymbrowitz who pledged to continue to use his experience, relationships and seniority on behalf of his constituents. Ben Axelrod, an Orthodox Jew who was born in the Soviet Union, discussed his ideas and vision for the future. Mr. Axelrod lost narrowly to Mr. Cymbrowitz in a primary four years ago. The questions addressed to both candidates were pointed and led to some very productive conversations. Coalition members used this opportunity to voice their concern and feelings on a number of issues including education, morality issues, kids at risk, and government support for communal organizations

The FJCC (Flatbush Jewish Community Coalition) was formed almost two years ago to unite and represent the greater Flatbush/Midwood communities, on communal, civic and political concerns.

Malcolm Hoenlein, FJCC honorary chairman, urged every voter to go to the polls today, “with turnout so light, every vote will count, more than you realize. Elected officials and decision makers are watching us. If you are a registered Democrat, the polling stations are open until 9 PM tonight. It’s so easy to help your community, please take 10 minutes and go vote.”

To find out where to vote, go to: http://nyc.pollsitelocator.com/search or call 1-866-VOTE NYC.