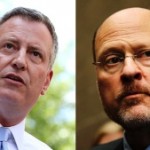 There were also some heated moments when the candidates took exception to comments made about them. For example, de Blasio, the race’s Democratic front-runner, accused Lhota of distorting his stands on some issues.

“I’d like my opponent to at least pay attention to the things I’ve said and accurately portray them,” de Blasio said.

Meanwhile, Lhota seemed annoyed that de Blasio, the city’s public advocate, consistently tried to paint him as being in line with national Republicans.

“Don’t lump me in with people who I’m constantly in disagreement with,” said the former MTA head. ” … Where I don’t agree with the national Republican Party is long and hard. I am pro-choice; they are not… I have been outspoken about these issues over and over again.”

The issue of income inequality was front and center in the debate.

Lhota admitted that the earning gap is an “extreme problem,” but he also attacked de Blasio for his signature “tale of two cities” campaign message.

“Where I disagree with my opponent is he talks about a tale of two cities, where you basically divide the city into class warfare, where it’s rich vs. poor, black vs. white, old vs. young,” Lhota said. “What we need to do is have a tale of one city, where we all work together.”

De Blasio argued the he’s simply acknowledging the problem, saying 46 percent of the city is living at or near the poverty line and that the middle class is disappearing.