Today is the first yahrtzeit of chosson and kallah Yisroel Levin z”l and Elisheva Kaplan a”h, who were killed one year ago, on Chol Hamoed Pesach 5778.

Five cars, with nine total occupants, were involved in the crash at about 1:40 a.m. last year on Chol Hamoed on the Nassau Expressway between Burnside Avenue and Peninsula Boulevard.

This was the plea of R’ Shaya Levin, father of Yisroel, to Hashem that reverberated through the overflowing crowd at the levaya of his son and daughter-in-law to be.

A mere few hours earlier, an unfathomable tragedy befell not only two families, but impacted the entire Klal Yisroel and world at large. A young, happy, newly engaged couple were tragically taken in an accident. Yet, at such a devastating and trying time, R’ Levin chose to do and say what was beyond the average person’s level of emunahand selflessness.  He begged Hashem to help Klal Yisroel.

The afikomen presents that R’ Shaya pleaded for were all requested as a gift from Heaven. However, hearing the request for ten thousand shidduchim brought to mind a mashal; it is told of a man who davened all his whole life to win the lottery, but when the man passed away Hashemtold him that had he only bought a lottery ticket he would have won. While only Hashem can send ten thousand shidduchim, it is incumbent upon us to do our part in trying to facilitate the yeshuaand then daven to see the yad Hashem unfold.

The goal of this project is to encourage and empower everyone, every single Jew,  to make shidduch suggestions to the singles in their life, whom they know better than any shadchan can. Often, people are hesitant to suggest a shidduch as they are not a “professional” shadchan and therefore think that they shouldn’t get involved. Ironically, many singles feel that the best shidduch ideas, more often than not, are presented to them by friends and relatives rather than “professional” shadchanim. If we can overcome the barriers holding the average Jew from redting shidduchim and go beyond our ‘comfort zone’, if each person takes just a few minutes to think of the next, we can together change lives, we can improve the shidduch system at large and we can ultimately make the world a better place!

R’ Shaya later wrote to Matzav.com: “When you think about it, the 10K project is changing history in Klall Yisroel. Until now, everybody relied primarily on professional shadchanim to come up with all of the suggestions to take care of all the shidduchim in Klall Yisroel. With this project we are changing the mindset of everyone – it is up to US to think of shidduchim for our fellow Yidden. There are simply not enough professional and nonprofessional shadchanim to alleviate the backlog that has accumulated of older singles and even to deal with the current crop of new younger singles entering the parsha. We know from the Medrash in Breishis that Hashem is sitting and making shidduchim upstairs. But now thanks to this project, we have so to speak incentivized Kavyachol to make even more shidduchim because He sees all of Klall Yisroel voluntarily getting involved ( – sometimes out of their comfort zone) just to help out a fellow Yid. In essence you are tapping in to Hashem’s rachmonus on us because He desires so much to see us acting Kish Echad Blev Echad. Kol Hakavod!”

There was – and is – a burning desire in klal yisroel to do something leiluy nishmas Yisroel and Elisheva, and this project very much resonated with the hearts of the klal. Perhaps it’s the painful loss we feel of not seeing the chosson and kallah walk down the aisle that motivated so many to try and help others down to the chuppah and literally build homes in their z’chus. Or perhaps, most people already had suggestions in mind that they were uncomfortable actually making a push for, yet this initiative encouraged them to leave their comfort zone for the next person.

All are asked to learn and daven as a zechus for Yisroel ben R’ Yeshayahu Levin and Elisheva Basya bas R’ Yechiel Ephraim Kaplan. 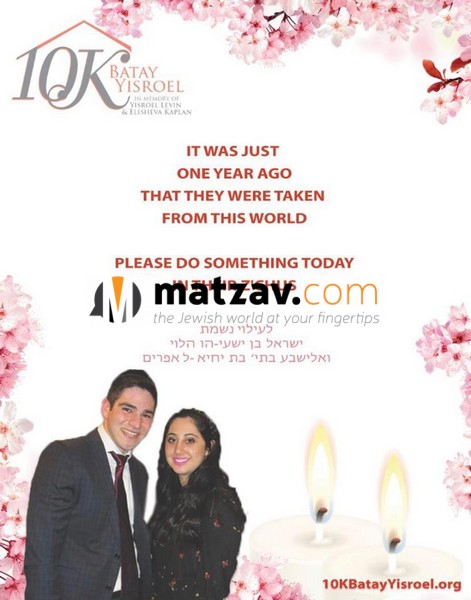