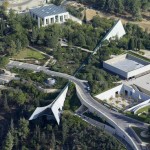 Israel’s Yad Vashem Holocaust museum on Tuesday announced the first-ever “Righteous Among the Nations” honor for a U.S. soldier.

The late Master Sergeant Roddie Edmonds rescued Jewish servicemen at the Stalag IXA POW Camp in Germany while he served in the 422nd Infantry Regiment of the U.S. Armed Forces in World War II.

“Master Sergeant Roddie Edmonds seemed like an ordinary American soldier, but he had an extraordinary sense of responsibility and dedication to his fellow human beings,” said Yad Vashem Chairman Avner Shalev.

“These attributes form the common thread that binds members of this select group of Righteous Among the Nations. The choices and actions of Master Sergeant Edmonds set an example for his fellow American soldiers as they stood united against the barbaric evil of the Nazis,” he added.

Edmonds served as a non-commissioned officer in Europe during the war, was taken prisoner by the Germans during the Battle of the Bulge, and was later interned at Stalag IXA.

His son, Chris Edmonds, is participating in a seminar in Israel sponsored by the International School for Holocaust Studies for Christian leaders.