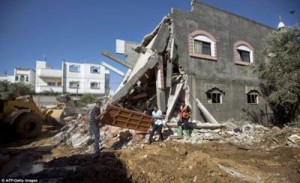 During the first 24 hours of the Gaza war, Palestinian terrorists fired more than two hundred rockets into Israel. Yet only one Israeli was wounded, and none were killed. How is that possible?

When Israel fires missiles at enemy targets, they strike with pinpoint accuracy. Sometimes they hit a lone terrorist on a motorcycle, or a single, targeted apartment in the middle of a dense cluster of apartment buildings.

Yet when Hamas, Islamic Jihad, and other Palestinian terror groups fire rockets into Israel, the vast majority land in empty fields or parking lots or other uninhabited sites.

Israel has the sophisticated computer systems necessary to ensure that their missiles lock on the desired target. The Palestinians don’t have that technology.

The reason they don’t is because of the Israeli blockade of Gaza.

That’s right, the much-maligned Israeli blockade–the focus of so much griping by the Arabs, by Palestinian support groups around the world, by the United Nations and even by the Obama administration. That blockade. It’s working.

Israel took a lot of heat for intercepting the Mavi Marmara, the ship of pro-Hamas extremists from Turkey and elsewhere that tried to bust the blockade of Gaza in 2010. In the aftermath of that episode, various groups adopted the blockade issue as their cause du jour.

In 2011, for example, a panel of five “independent human rights experts” for the United Nations declared that the blockade is “a flagrant contravention of international human rights law.” In 2012, the UN’s annual report on the Gaza situation called the blockade “collective punishment.” In 2013, the UN’s “humanitarian coordinator” for Gaza, James Rawley, claimed that “Gaza is becoming uninhabitable” because of the blockade. And just this part March, the commissioner-general of the United Nations Relief and Works Agency declared that the blockade “is illegal and must be lifted.”

Even the Obama administration, which one would have hoped would not fall in line with the knee-jerk Israel bashers of the world, has tried to get Israel to ease up on the blockade. “Gaza Blockade Untenable, U.S. Believes,” read the headline of an NBC News report back in 2010. “The Obama administration believes Israel’s blockade of Gaza is untenable and wants to see a new approach that would allow more supplies” into the territory, NBC reported.

That same week, Vice President Joe Biden told interviewer Charlie Rose, on Bloomberg TV: “We have put as much pressure and as much cajoling on Israel as we can to allow them to get building materials” and other forbidden items into Gaza. Biden seemed oblivious to the fact that many construction materials are what is known as dual-use items: in addition to their primary purpose, they can also be used for terrorist purposes. Concrete for the foundation of a building can also be used to make an arms-smuggling tunnel.

Fortunately, Israel resisted all this international pressure. It maintained the blockade. And as a result, Palestinian rocketeers without target-locating computers continue to fire their missiles into open fields instead of supermarkets and kindergartens.

Amnesty International and the rest owe Israel an apology. But we won’t hold our breath waiting for that. Instead, we’ll just carefully note whose advice has proved sound, and what lessons can be learned from this experience.

The first lesson from the Gaza war: Blockading the enemy works.

[The authors are members of the board of the Religious Zionists of America.]