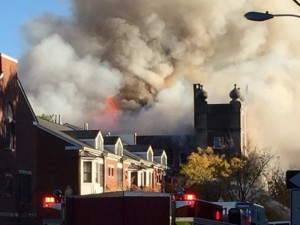 The cause of a huge fire broke out Friday afternoon at a historic New Brunswick shul is under investigation.

Firefighters remained on the scene Friday evening, but the flames had been knocked down, said Jennifer Bradshaw, a spokeswoman for the city.

There were no reports of injuries, said Bradshaw.

Nearby buildings on surrounding streets were evacuated as a precaution.

Around 4:20 p.m., firefighters received a report a smoke condition in the shul.

Within minutes, firefighters responded and found smoke in various spots in the building, according to a news release from the city. Soon after, flames broke through the roof.

One person was inside at the time, but got out safely, according to the news release.

No injuries were reported.

The cause of the fire is not yet known.

Patrick Murray, the Director of the Monmouth University Polling Institute, tweeted that flames burst through the back part of roof at the shul. Shortly after 6 p.m., he tweeted that the building was “an empty shell,” but he said firefighters told him that surrounding buildings were unharmed.

“Poile Zedek Synagogue now an empty shell. Horrible loss both for the congregation and for larger community,” he said in a Tweet.

According to the shul’s website, the building was placed on the National and State Registers of Historic Places in 1995.

Here’s some more information about the history of Poile Zedek:

“Poile Zedek was initially founded as a mutual aid society on November 18, 1901 in the home of Mr and Mrs Benjamin Elfant, 25 Hiram St, New Brunswick. Originally known as the Independent Laborers’ Benefit Association, most early congregants were from Russia or Poland. The congregation purchased its current home on Neilson Street in 1905. On August 19, 1923, the cornerstone ceremony was held and one year later, the present building was completed and began being used for services. At that time, the congregation changed its name to Poile Zedek, which means “doers of righteousness.’”