A large fire this afternoon thoroughly destroyed the Woodridge, NY, pizza store owned and operated by R’ Shragie and Frumie Feller and family.

The structure of Feller’s Woodridge Pizza Cafe & Fish Grill, located at 9 Broadway at the corner of Greenfield Road in the heart of the town of Woodridge, collapsed as firefighters from surrounding towns, including Woodbourne and Mountaindale, joined in battling the blaze.

The smoke that billowed to the sky this afternoon was so heavy that it could be seen several miles away. 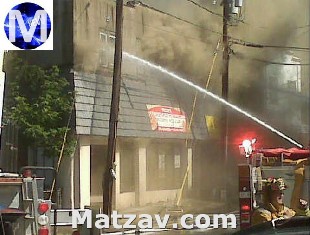 Fire officials have not yet revealed the cause of the fire.

The Fellers are residents of the Village Park neighborhood in Lakewood, NJ. Mrs. Feller is a daughter of noted askan, R’ Ronnie Cagan.

R’ Shragie Feller is also the proprieter of other establishments in the Catskills, including Sprinkles in Fallsburg.

According to reports, despite the size and intensity of the fire, there have been no injuries, boruch Hashem.

According to reports, due to the fire, electricity and water in nearby areas has been temporarily cut, with utility compnaies working to restore services as soon as possible.