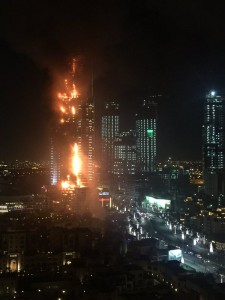 [Video below.] Pictures are emerging on Twitter showing The Address Downtown Dubai hotel engulfed in flames.

The building that hosts the 5-star hotel is 302 meters tall and is located not far from the New Year’s Eve fireworks display.

It was not immediately clear what caused the fire, which covered at least 20 stories of the building near the Burj Khalifa, the world’s tallest skyscraper, AP reports.

Burning debris rained down from the building as firetrucks raced to the scene.

Nobody was injured in the fire, a civil defense official told Al Arabiya. 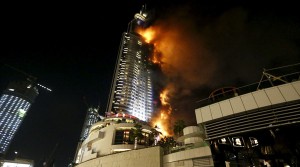 Social media users have reported panic as people run away from the area around the building.

The hotel and residential compound has nearly 200 rooms and over 600 apartments.

Local media say that The Address has been evacuated, and people are being moved out of the Dubai Mall located nearby.

Currently, there are at least four firefighting brigades at the site to deal with the blaze and ensure the safety of the public, according to the Twitter account of the Dubai government’s media office.