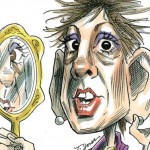 Republican presidential candidate Carly Fiorina Thursday slammed front-runner Donald Trump for his recent attacks on Ben Carson’s “pathological temper” — saying that “all the money in the world won’t make you as smart as Ben Carson.”

“Donald, sorry, I’ve got to interrupt again,” the former Hewlett-Packard CEO began in a Facebook post. “You would know something about pathological.

“How was that meeting with [Russian President Vladimir] Putin? Or Wharton? Or your self-funded campaign?”

Trump told Erin Burnett on CNN Thursday that the “pathological temper” the retired pediatric neurosurgeon described as having as a youth was “a big problem because you don’t cure that.”

In her Facebook post, Fiorina also bashed Trump for the billions he received from his father — also a developer — but misspelled the word “inheritance.”

“Anyone can turn a multi-million dollar inherentence into more money,” she said, “but all the money in the world won’t make you as smart as Ben Carson.”