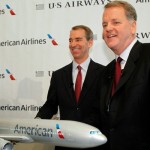 The last US Airways flight took off Saturday morning from San Francisco to Philadelphia in the final leg of its roundtrip journey.

The airline will send out all future flights under the name American Airways in the completion of a merger first announced in 2013.

The plane is named after the airline’s founding year: Flight 1939. Read more at ABC News.