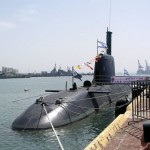 The Israel Navy’s fifth Dolphin-class submarine is making the journey to its home base in Haifa from its German manufacturing center, a senior naval source said Thursday.

The INS Rahav is the navy’s second AIP (air independent propulsion) submarine, which can remain submerged for significantly longer periods than conventional submarines. Having two such submarines means that Israel has “doubled its covert capabilities,” the source said.

“Drones that fly in the air can be shot down, but a submarine can stay in enemy territory for weeks, and no one knows it’s there,” a past commander of the navy’s submarine school told the Jerusalem Post in 2014.