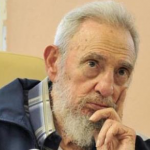 Cuban ex-president Fidel Castro lashed out at Israel, the United States and Europe on Monday, saying Israel’s Mossad intelligence agency was behind the radical Islamic State group and comparing NATO military representatives to the Nazi SS.

In a column published in Cuban state media, the father of the island’s communist revolution also attacked US Senator John McCain over United States policy in the Middle East, calling him “Israel’s most unconditional ally.”

“The world has seen no respite in recent years, particularly since the European Economic Community, under the strict and unconditional leadership of the United States, decided the time had come to settle scores with what was left of two great nations (Russia and China) that…had carried out the heroic deed of putting an end to the imperialist colonial order imposed on the world by Europe and the United States,” said the 88 year old leader.

He accused the West of “cynicism” and said the trait had become “a symbol of imperialist policy.”

He singled out McCain, the 2008 Republican presidential candidate, saying he had supported Israel’s Mossad and “participated together with that service in the creation of the Islamic State, which today controls a considerable and vital portion of Iraq and reportedly one-third of Syria as well.”

“Many people are astonished when they hear the statements made by some European spokesmen for NATO when they speak with the style and face of the Nazi SS,” he said.

“Adolf Hitler’s greed-based empire went down in history with no more glory than the encouragement provided to NATO’s aggressive and bourgeois governments, which makes them the laughing stock of Europe and the world.”

Castro handed power to his younger brother Raul in 2006 amid a health crisis, and has since devoted his time to writing books and articles and receiving foreign dignitaries.