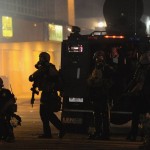 A Ferguson, Mo., cop was shot last night during continuing protests over the shooting and killing of Michael Brown, 18, on Aug. 9. A spokesman for the St. Louis County Police Department said the officer, a woman, was shot in the arm and was expected to recover.

The local CBS affilate, KMOV, said law enforcement from Ferguson and St. Louis counties were conducting a massive manhunt in a bid to find the suspect, who reportedly fled on foot into nearby woods.

Ferguson, long a simmering pot of racial tension, exploded in major riots and disturbances for weeks in August after the death of the unarmed Brown at the hands of white police office Darren Wilson. On Thursday, Ferguson police chief Thomas Jackson issued a videotaped apology to the family of Brown. Read more at The New York Times.