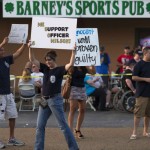 Two online donations pages that together raised over $400,000 for the cop who fatally shot unarmed black teenager Michael Brown were shut down over the weekend. The two pages for Darren Wilson operated through crowdsource fundraising website GoFundMe. When one tries to donate to “Support Officer Wilson” (which has raised $197,620) and “Support Officer Darren Wilson” (which has raised $235,550), a message stating “Donations are Complete!” appears.

GoFundMe stated it did not shut down either of these sites. The Facebook page “Support Officer Wilson” said lawyers were working on a “solution” for the shutdown. A donations page for Michael Brown’s family, “Michael Brown Memorial Fund,” is also run through GoFundMe. It has so far raised $315,049. Read more at the Los Angeles Times.