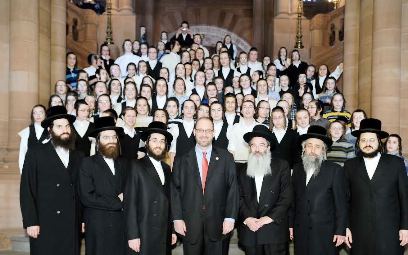 A group of approximately 200 students from the Bobover Yeshiva Bnei Zion had an opportunity to see their government in action yesterday during a tour of the State Capitol hosted by Senator Simcha Felder (D-Brooklyn).

A State Capitol tour guide accompanied the 8th and 9th grade boys and their chaperones through the Capitol’s museum, the Senate Chamber, the Executive Chamber (also known as the Red Room), the Hall of Governors, and the Flag Room, which displays over 1,000 different flags from various wars. The students also had a chance to pose for pictures with Senator Felder on the Million Dollar Staircase, which is made up of 444 steps.

“I was absolutely delighted to host the students from Bobover Yeshiva Bnei Zion,” said Senator Felder, who serves as Chair of both the New York City Education Subcommittee and the Children and Families Committee. “I always enjoy seeing my constituents when I’m in my district, but it was especially nice to see these kids visiting Albany. This was really a worthwhile and educational experience for these kids. There is so much history in the Capitol and so much history being made every single day.”

As part of the tour, the students learned about the legislative process, including how a bill becomes a law, and had a chance to greet some of Senator Felder’s colleagues in government.

“We are all so thankful and grateful to Senator Simcha Felder and his dedicated staff for arranging this tour and making it a reality,” said Rabbi Heshy Dembitzer, Executive Director of Bobover Yeshiva Bnei Zion. “Our kids had such a wonderful time and are still talking about the things they learned. We are already working with Senator Felder’s office to plan future visits to the Capitol for our other grades.”

“This field trip gave these kids an opportunity they otherwise would not have had and a new appreciation for how their State government works to make a difference in their daily lives,” added Senator Felder.

If you would like to schedule a tour of the State Capitol with Senator Felder for your educational institution, contact Senator Felder’s Albany office at 518-455-2754.