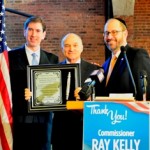 “Today is all about gratitude, about saying thank you to an individual that I consider to be the quintessential public servant,” Senator Felder said of Commissioner Kelly. “And the best police commissioner New York City has ever had,” he added.

At the breakfast, Senator Felder and Councilman-elect Deutsch presented a silver mezuzah and plaque to Commissioner Kelly. “You have kept us and our families safe for the last 12 years,” Senator Felder said in presenting the gift. “We thank you for your service, and present this mezuzah – a symbol of protection and safety – to you as a token of our appreciation.”

Senator Felder also noted that thanks to the efforts of Commissioner Kelly, a 43-year veteran of the NYPD, New York City is on track to become the nation’s safest city.

“Studies show that every neighborhood in the City is flourishing despite the economy because crime is down,” the Senator said. “With the help of God, New York City has not experienced a terrorist attack since 9/11. The City has come back in every way since 9/11, and it’s due in large measure to the safety and security all New Yorkers have enjoyed during Commissioner Kelly’s tenure.”

The Senator remarked that there are only three cities considered safer than New York, namely, Plano, Texas; Lincoln, Nebraska; and Henderson, Nevada. “And if you want, you can leave now,” the Senator said to much laughter.

Senator Felder also welcomed and congratulated newly-elected Councilman Chaim Deutsch, the founder of the Flatbush Shomrim, who co-hosted the event with him.

“It is fitting that you, as the founder of the Flatbush Shomrim, are here today to help pay tribute to NYPD Commissioner Raymond Kelly,” Senator Felder told Councilman-elect Deutsch. “Both the Flatbush and the Boro Park Shomrim have a long history of working together with the Police Department to keep our streets and neighborhoods safe. We are all grateful to the Shomrim for their cooperation and assistance.”

In his speech, Councilman-elect Deutsch said, “Raymond Kelly has led the New York City Police Department with pride and distinction. . .he has gone above and beyond the call of duty and helped bring the NYPD to where it is today. There’s a reason that the NYPD is hailed as the greatest police department in the world.”

Commissioner Kelly thanked the Senator and Councilman-elect, and echoed the Senator’s remarks, saying that after the September 11 attacks, people said New York City was “doomed.” He shared that 16 terrorist attacks against New York City have been thwarted since 9/11, and warned that the City must remain ever vigilant against those who seek to harm us. The Commissioner also acknowledged his top commanders and the brave men and women of the NYPD saying it was a privilege to lead them.

At the conclusion of the program, throngs of people mobbed the Commissioner in order to get a photograph with him. “This was the right thing to do,” said Senator Felder following the event. “I am so glad we had this opportunity to thank Commissioner Kelly for everything he has done for this City.”